If you have any information about these crimes or any person(s) involved, you are urged to call Crime Stoppers at 859-253-2020 or submit a Web Tip .  You do not have to give your name.  CRIME STOPPERS will pay a cash reward of up to $1000 and you can remain anonymous.

On Tuesday, September 7th, at approximately 4:00 a.m. the victim stated the suspect broke into her vehicle. The vehicle was parked at a business in the 1100 block of New Circle Road when someone unlawfully entered and stole her purse. Her purse and the contents inside were valued over $1,000. 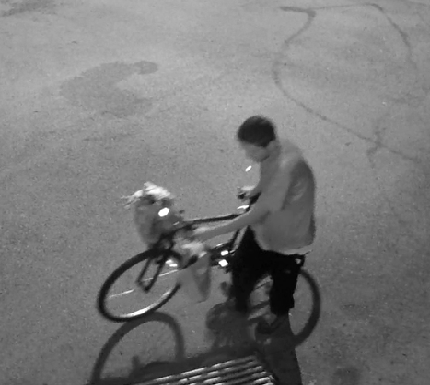 On Monday, October 18th at approximately 3:50pm Officers responded to a residence in the 2000 block of Larkspur Road reference a robbery.  The victim stated an unknown suspect was armed with a firearm when he used force to enter his residence.  The suspect ultimately stole an item from the victim valued over $1,000. 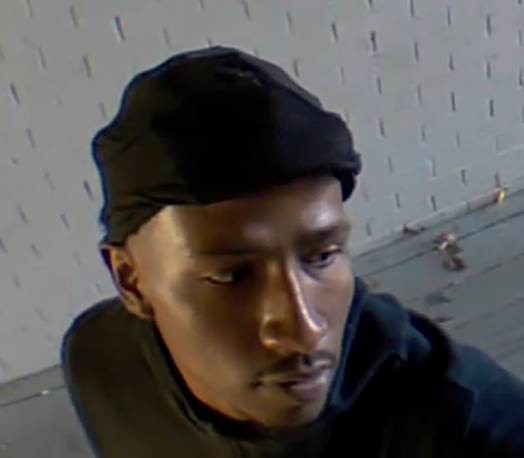 On Sunday, August 1st, an individual unlawfully entered a building in the 900 block of National Avenue.  Ultimately he gathered numerous power tools in a large bag and exited the premises.   The total value of the items taken was well over $1,000. 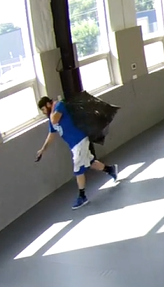 On Thursday, July 29th, at approximately 0430, hours the Lexington Police Department responded to a possible burglary in progress at a business located in the 1000 block of Sunshine Lane.  Officers learned two individuals used force to enter the business and ultimately stole several items.  The suspects fled in an unknown vehicle at a high rate of speed prior to Officers arriving on scene. 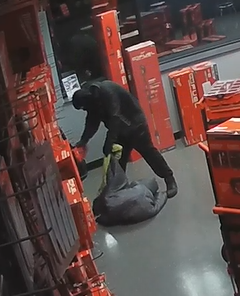 On Saturday, August 21st the Lexington Police Department responded to a theft report in the 1000 block of Majestic Drive.  It was learned that several nights prior, two individuals entered the parking lot in a pickup truck and took nearly 15 minutes to remove the catalytic converter from the victim’s vehicle, causing damage well over $1,000. 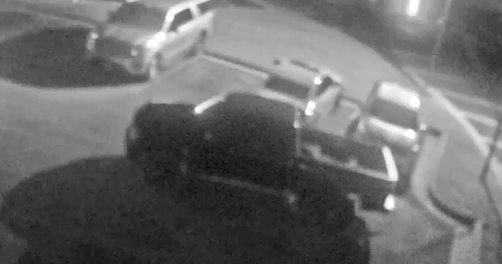 On Sunday, September 5th around 1:00am Officers responded to a gas station in the 3000 block of Mapleleaf Drive in reference to shots fired.  Upon arrival Officers learned that the suspect had fired three shots into the business and then forced entry inside causing substantial damage.  No items were missing from the business but we are seeking the public’s help in identifying the suspect who was caught on surveillance. 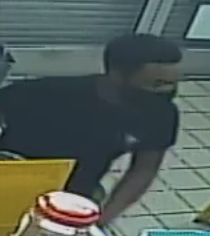 On Wednesday, April 7, 2021 around 11:16 p.m., officers responded to the 1800 block of Colchester Drive for a report of shots fired. When officers arrived they were advised the victims had left the scene.  Two individuals arrived separately at a local hospital with gunshot wounds.   Officers were advised a 19-year-old victim was in stable condition.  The other 20-year-old victim was pronounced deceased.

The Fayette County Coroner’s office identified the victim as Herbie Booker, of Lexington. 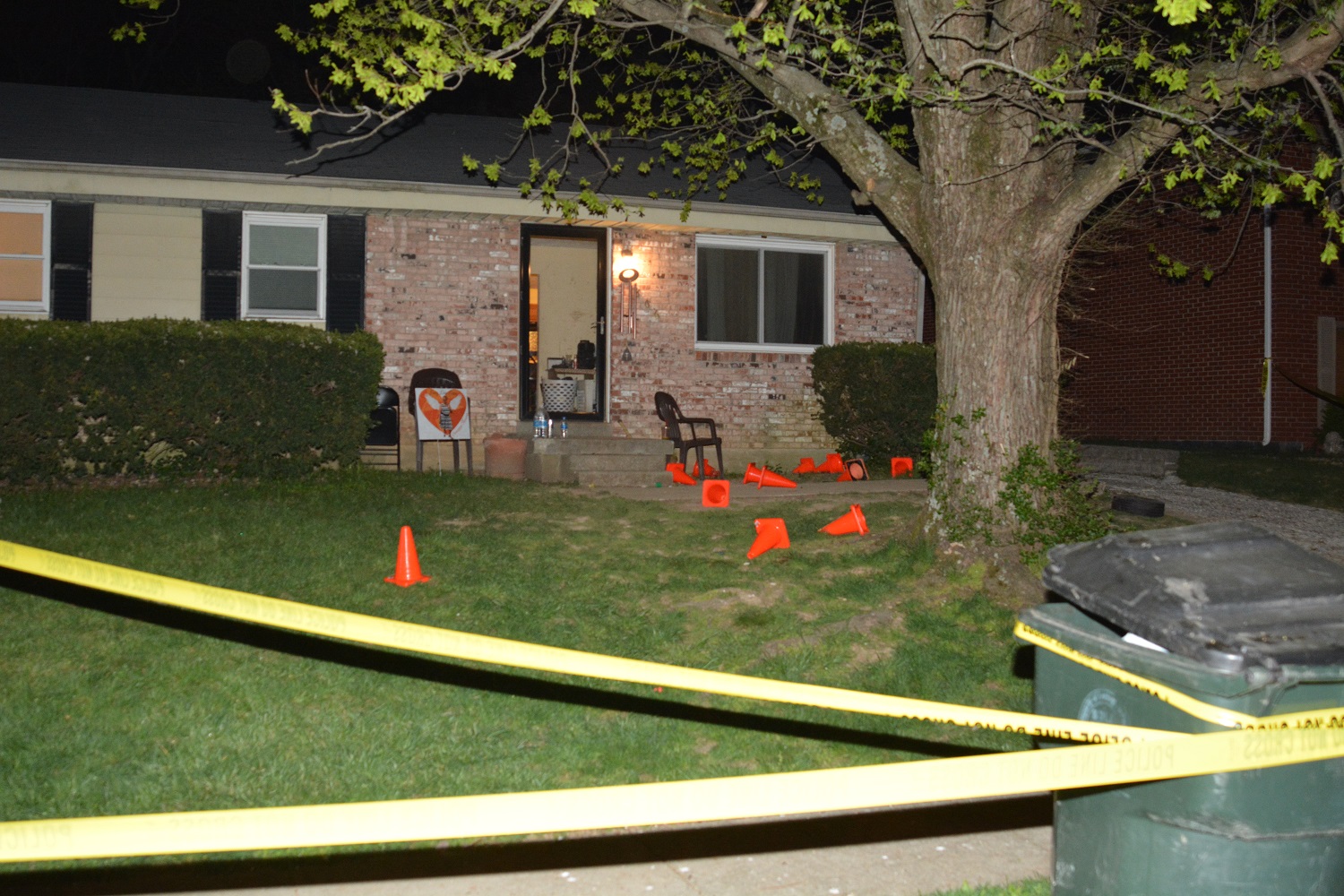 On Saturday, August 7th the Scott County Sheriff’s Department responded to a vehicle break-in at a local park in Georgetown.  It was determined several items were taken from the vehicle including credit cards.  The victim was notified the cards were unlawfully used at a local convenience store in the 800 block of South Broadway Road.  The business was able to provide still images and video of the suspects. 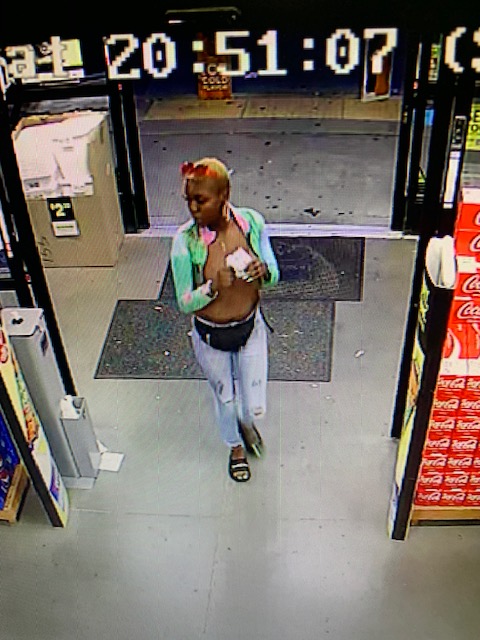 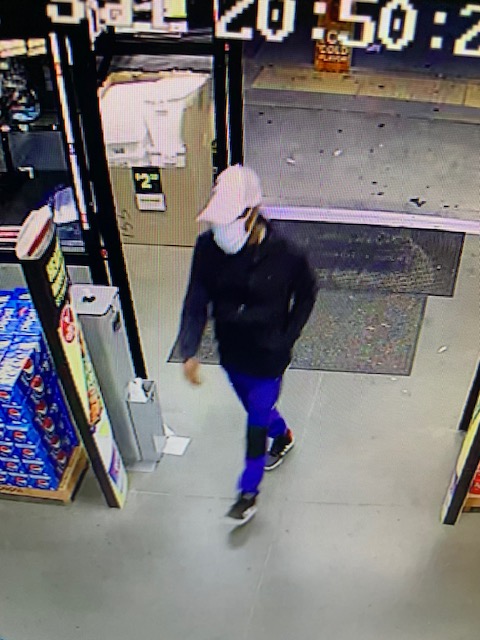 On Friday, August 13th two individuals entered a department store in the 200 block of Old Todds Road.  Both suspects filled their shopping carts full of merchandise and simply exited the store without paying for the items.  They fled the store in a maroon or red Jeep. 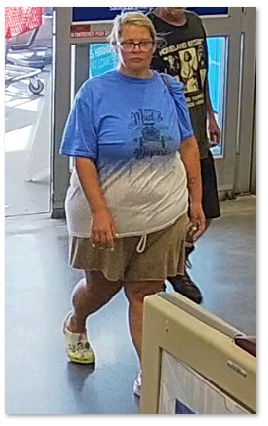 In the past month a business in the 3000 block of Boston Road has had multiple thefts from their premises. Video provided by the business shows the same individual walk onto the property and steal items. The suspect fled the scene in a black Dodge Charger. 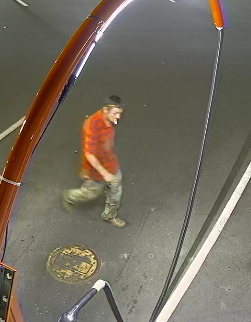 On Wednesday, July 7th the below individual stole a package from the front porch of a residence in the 3000 block of Wavecrest Way. Please help us identify the below suspect? 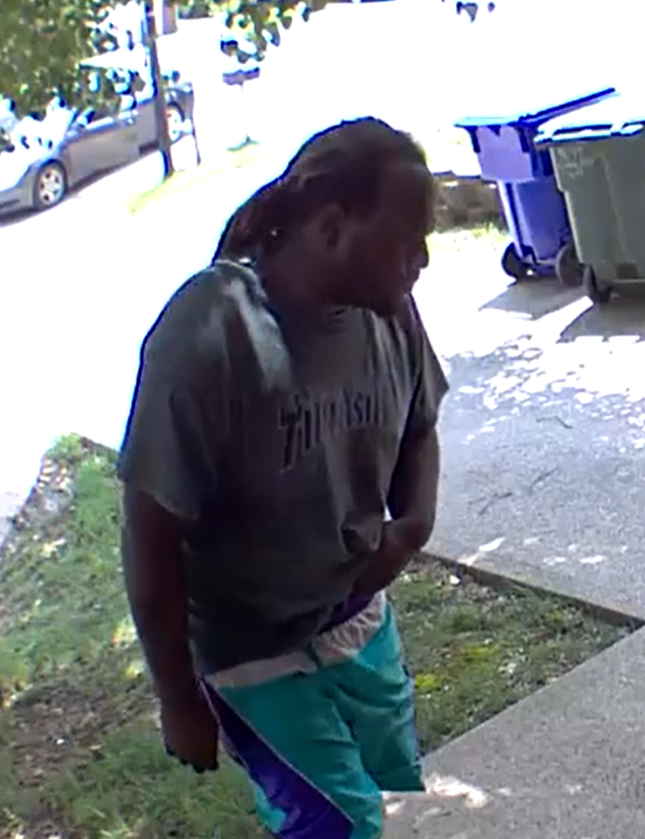 On Saturday, July 31st an individual contacted the Lexington Police Department to report that his military gear had been stolen from his vehicle.  The items had been secured overnight in a parking lot in the 1700 block of Sharkey Way.  Video and still images were provided. 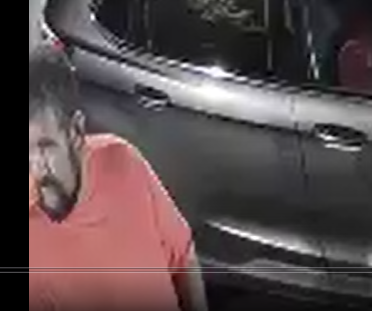 On Thursday, June 17th it was reported to the Lexington Police Department that a medical facility had ordered several computers that were to be delivered.  They advised the below suspect was able to intercept the delivery and sign for the computers before taking them.  The actual theft occurred on Monday, June 14th at a local FedEx facility. 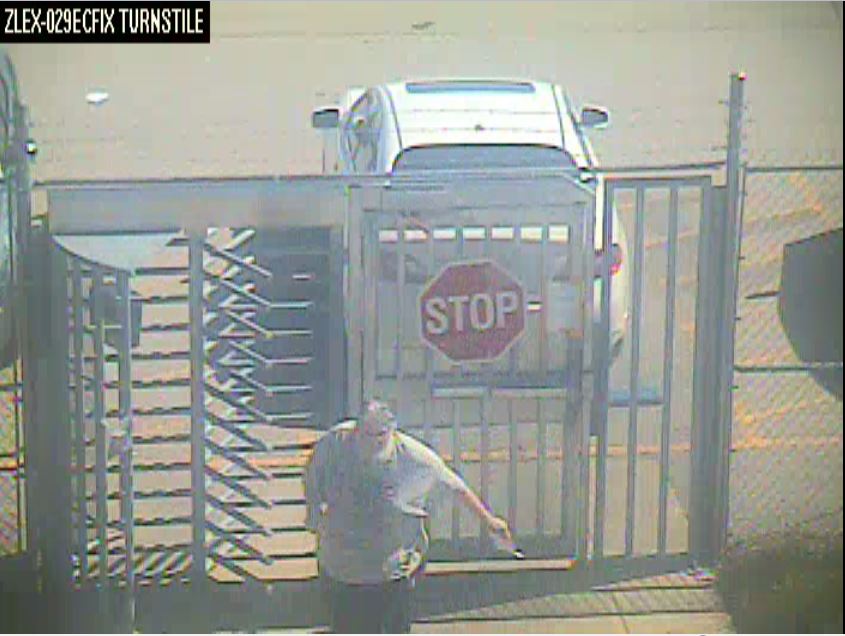 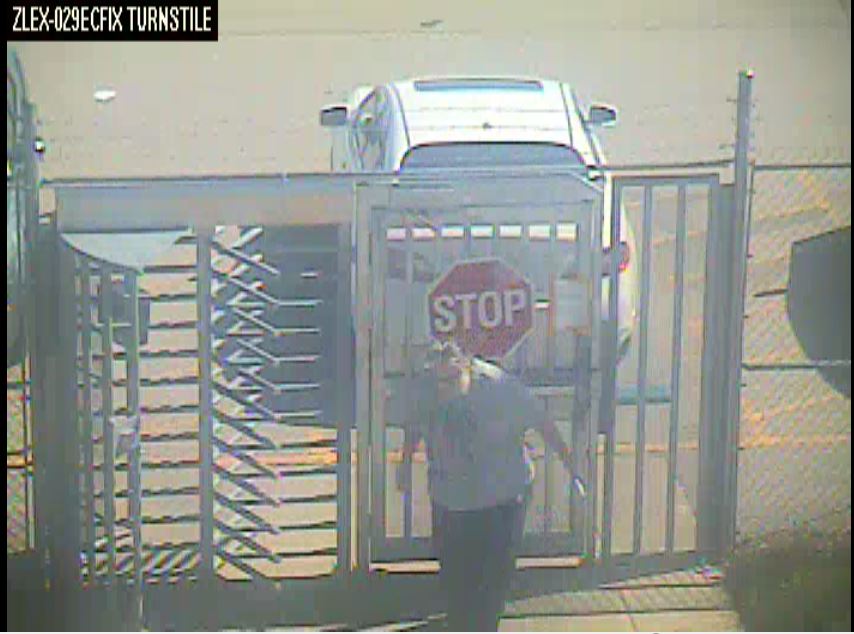 On Monday, July 19th, the Lexington Police Department responded to Traditional Bank on Tates Creek Road reference an alarm.  Upon arrival employees advised and individual had entered the bank and demanded cash.  He is described by multiple witnesses as a male white, approximately 5’ 8” to 5’ 10” and weighing around 175 pounds.  He had brown hair and brown eyes and is believed to be in his 30’s.  He left the bank with an undisclosed amount of cash.  Multiple photos and video was captured of the suspect. 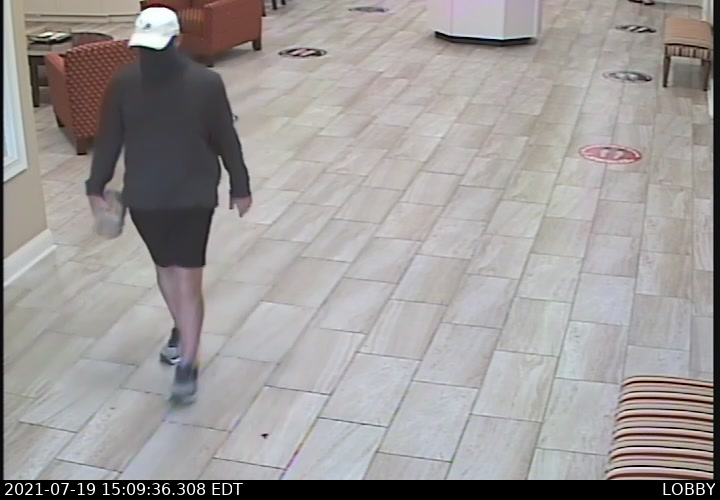 On Wednesday, July 14th two individuals unlawfully entered several vehicles in the parking lot of the Country Club located in the 2000 block of Bahama Road.  This incident occurred late in the afternoon and several items were taken from the vehicles.  A short time later one of the stolen credit cards was used at a business in Hamburg to make a purchase before the victim was able to cancel the card.  Multiple photos and videos of the suspects were provided.

On Sunday, June 27, 2021, a business in the 1000 block of Harrodsburg Road reported a burglary during the early morning hours.  Camera footage provided by the business showed a suspect use force to gain entry to the restaurant.  The suspect spent a considerable amount of time inside the restaurant before leaving with an undisclosed amount of cash. 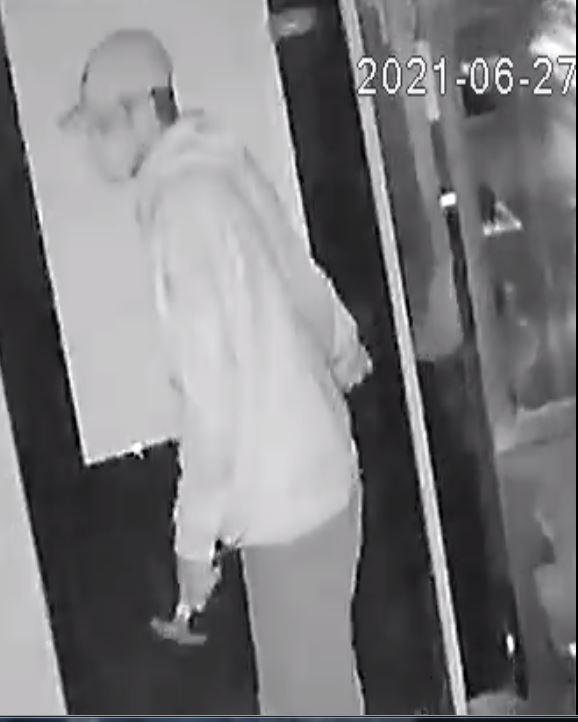 On Tuesday, June 29, 2021, Officers with the Georgetown Police Department responded to the 100 block of Pocahontas Trail reference a robbery in progress. The suspect was armed with a hammer and demanded money. The manager was able to briefly disarm the suspect and ultimately call for help. The suspect fled the scene before officers arrived. 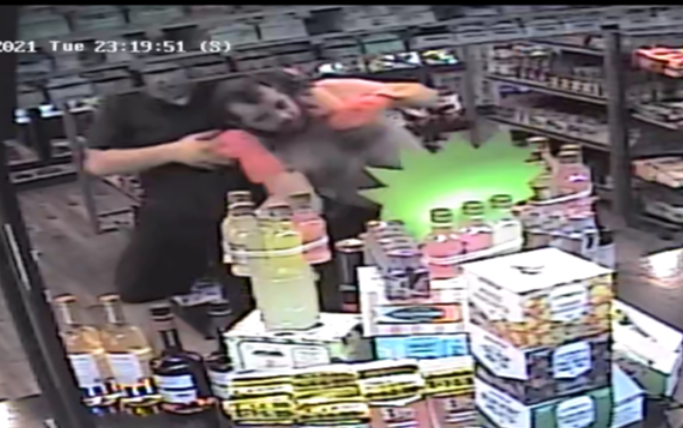 Between Friday, June 2021, and the early morning hours of Saturday, June 5, 2021, two suspects unlawfully entered a town home under construction in the 3000 block of Tates Creek. The suspects stole power tools and copper from the premises. They also caused a substantial amount of property damage. 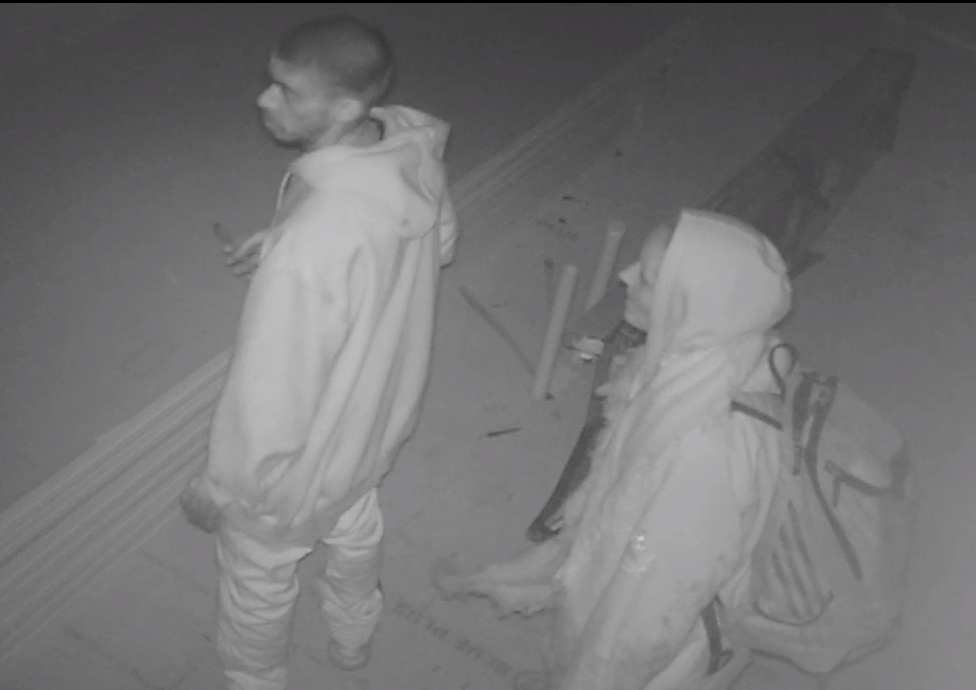 On Wednesday, May 26th, just after midnight the Lexington Police Department received multiple calls of shots fired in the 300 block of South Broadway.  Upon arrival Officers located a business that had sustained damage.  Upon reviewing video it appears that multiple people were involved in the shooting but Officers need your help in identifying those who are visible on camera at the scene, including the below vehicle. 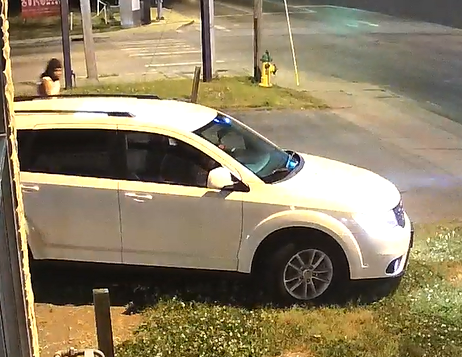 On Friday, May 28th, the victim’s vehicle was parked at the 2000 block of Nicholasville Road. Upon returning to the vehicle, the victim noticed a window was broken out and multiple items were missing. The victim’s credit card was later used at another location.